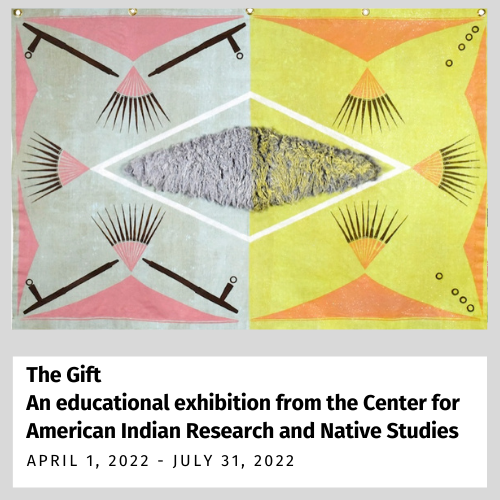 This year’s educational art exhibit from the Center for American Indian Research and Native Studies (CAIRNS), “The Gift,” is based on a traditional Lakotan narrative about when White Buffalo Woman, an emissary from the Pte Oyate (Buffalo Nation), gave a sacred pipe to the Itazipco Oyate, one of seven oyates of the Lakota division of the Oceti Sakowin Confederacy. In the Standing Rock Reservation in 1911, Lone Man shared a narrative, “The White Buffalo Calf Pipe (Ptehin’cala Canonpa),” about the gift, with Frances Densmore who published it in 1918. It is a wondrous account of that event.

The second section of the exhibit explores the seven ceremonies ⎯ “gifts” ⎯ that Black Elk says were foretold by White Buffalo Woman. For each gift, a Lakotan musician or musical group composed a song, a Lakotan poet wrote a poem, and two Lakotan visual artists each created an artwork. These creative works constitute the Gifts section of the exhibit.

The gifts were and are:

Thirty-nine creatives created songs, artworks, and poems for this exhibit. Of these, thirty-six are Lakotans who are citizens of five of the seven Lakota nations.