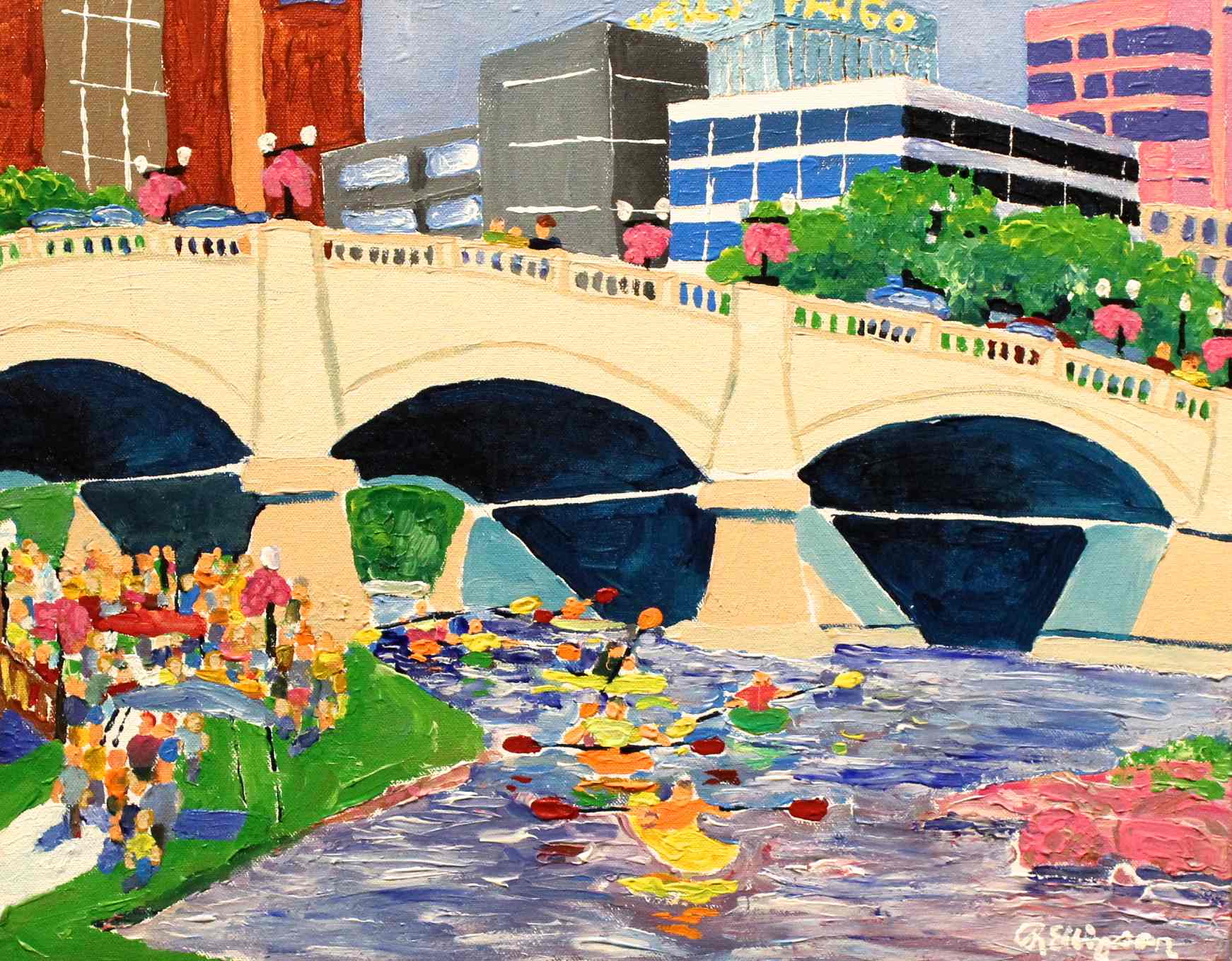 With its vivid and dynamic imagery, Rodger Ellingson’s gallery exhibition, “Sioux Falls in Color,” is truly a whimsical love letter to our community. The Center for Western Studies is excited to showcase a vision of our city as you have never seen it before. The urban landscapes of our beloved Sioux Falls, past and present, are splashed across the canvas with an obvious joy and mirth, which could only be created by an artist possessed of fantastic talent, and with a pride and passion for their subject.

In this collection, Ellingson has interpreted many well-known locations, including some that hold great personal significance for him, like the Lincoln High School Band, First Congregational Church, the Levitt Stage, and Augustana University. The exhibit also features some hand-pulled monoprints of Sioux Falls.

About the Artist:
Rodger Ellingson was born in, and currently resides in, Sioux Falls, SD, but he has also lived in Minnesota, Montana, Wyoming, and in the Black Hills of South Dakota. These varied settings have influenced his choice of subjects in his art. He is a retired special education teacher (Cody, WY, and Sioux Falls) and worked at summer camps and as a compliance officer and firefighter with the U.S. Forest Service. He is married and has one son, Charlie, who is currently attending Augustana University.

Ellingson began his post-secondary education at Augustana University, obtained his bachelor of science degree from St. Cloud State University in Minnesota, and received his master of science in rehabilitation counseling from Montana State University/Billings. He took a few art classes in college but is principally a self-taught painter, with help from other artists he’s known.

Often painting smaller watercolor plein air works around Sioux Falls, Elllingson also paints locations in eastern South Dakota, the Black Hills, and other settings from Yellowstone to Lake Superior. He regularly paints larger acrylic studio paintings based upon his watercolors or smaller acrylics. His work can be seen at EastBank Art Gallery, NV Studio, Myer’s Deli, and art and plein air shows around the region. He recently received second place Best of Show in the 2D artwork category at the Artists of the Plains Show.

Working in both watercolor and acrylic, Ellingson believes color is the most notable attribute of his work. The paintings featured in this exhibition are generally done plein air, or are based upon plein air works. The exuberant palette, which populates Ellingson’s work, motivates the viewer to explore familiar spaces of the city through the eyes of an artist.

We paint our lives on the canvas of this city. The streets, buildings, and people we pass every day color our lives in ways we could never imagine. In “Sioux Falls in Color,” Ellingson challenges us to see past the mundane to perhaps catch a glimpse of the magical.

The Center for Western Studies