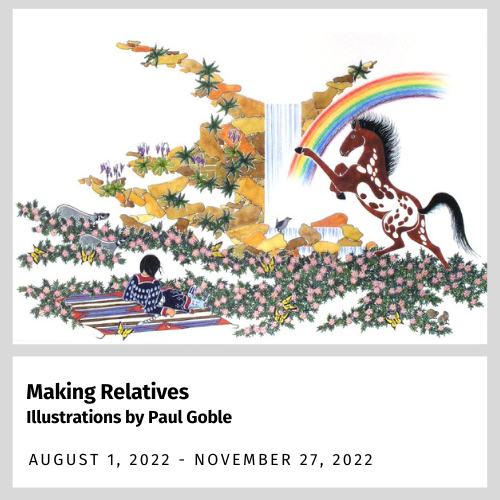 Children’s book author and illustrator Paul Goble is known for his retellings of Plains American Indian stories. The tradition of American Indian storytelling on the Plains is a fusion of artistry, entertainment, and higher purpose, where important cultural, spiritual, and familial lessons are intertwined. The illustrations on display are drawn from stories which reveal that relatives are much more than one’s connections by birth or marriage.

“The Girl Who Loved Wild Horses” is a story of transformative acts of love between man and animal. This relationship between man and animal is also highlighted in “Adopted by the Eagles,” a story in which such interdependent bonds provide protection and salvation when human trust fails. Other stories, like “Star Boy,” feature the marriage of a human with the natural world which ultimately brings transformation and healing to the community. “Her Seven Brothers” tells another story of transformation, underlining the value of unity through adversity, memorializing the family’s chosen bond in the story’s final image. These stories ultimately reveal that making relatives can provide security, salvation, and a sense of belonging.

Also included in the exhibition is a beaded frame by Jim Little Wounded (Oglala Lakota), which Goble owned and featured in “Adopted by the Eagles.” In the Goble home, the frame displayed a photograph of Chief Edgar Red Cloud.

The books these illustrations are drawn from are available for reference in the gallery and for purchase in the Museum Store.