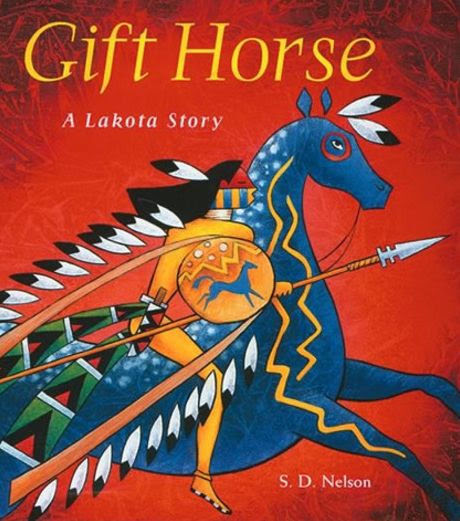 S.D. Nelson, an enrolled member of the Standing Rock Sioux Tribe, is a world-renowned artist and author.  He has written and illustrated ten books and illustrated six other books. Raised in a military family, S.D. often moved as a child, but spent summers at his mother’s home on the Standing Rock Reservation. It was there he learned about his Lakota heritage as his mother told him the traditional Lakota stories that would become the subjects of his books. After attending high school in Fargo, North Dakota, he earned a bachelor’s degree in Art at Minnesota State University in Moorhead.  Following graduation, S.D. briefly worked as an art teacher in the Wahpeton, North Dakota, public schools, before moving to Flagstaff, Arizona. S.D. spent 26 years as a teacher in the Flagstaff public schools before his first book Gift Horse, a Lakota Story, was published in 1999.

This exhibition features over a dozen original paintings S.D. created to illustrate four of his books – Dance in a Buffalo Skull, Crazy Horse’s Vision, The Star People-A Lakota Story, and Greet the Dawn will be included in the exhibit, which marks the first time S.D.’s work has been exhibited in South Dakota. His painting’s vibrant colors capture the viewer’s eye, and flowing lines and forms convey the sense of movement and action of their subjects.  His work often depicts the imagery of the open prairies where S.D. spent his childhood summers, with expansive skies, towering clouds, and endless seas of grasslands. Combining timeless Lakota stories with contemporary art, his books have captivated audiences both young and old for over twenty years.

S.D. Nelson has received recognition for his work in many forms, including presenting numerous lectures at the National Museum of the American Indian, Washington, D.C., and serving as the keynote speaker for 2010 South Dakota Literary Conference. His books have received the American Indian Library Association Honor Book Award, American Library Association Notable Book Award, and Western Writers of America Spur Storyteller Award. Additionally, his work has been exhibited at the Heard Museum, Phoenix, Arizona, National Museum of the American Indian, Washington, D.C., and Coconino Center for the Arts, Flagstaff, Arizona. This exhibit marks the first time that the collection of S.D. Nelson’s artwork that he recently donated to the Sioux Indian Museum has been exhibited in Rapid City.