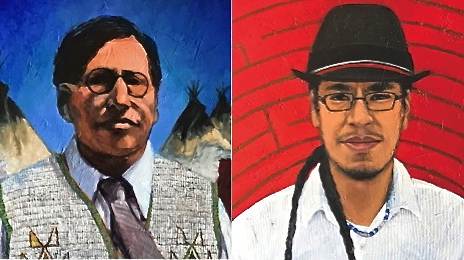 At the invitation of members of the Pipe On Head family in Oglala Lakota County, SD, artist Carolyne D. Landon has chronicled seven generations of life on the Pine Ridge Indian Reservation since the 1890 Wounded Knee Massacre through paintings of Chief Big Foot and his Pipe On Head grandsons up to the present generation.

James Pipe On Head, the grandson of Chief Big Foot, survived the massacre as a ten-year-old boy and later became president of the Oglala Wounded Knee Survivors Association. In 1938, he testified before Congress seeking reparations for survivors and the families of those who died in the massacre. His historical testimony describing the event as a massacre influenced the public memory of what happened at Wounded Knee in December of 1890.

“Seven Generations: Mending the Hoop” opens June 4, 2019, and runs through September 6, 2019. The exhibition is free and open to the public. Viewing hours are Monday-Friday from 8 a.m. to 5 p.m., and the first Saturday of the month from 10 a.m. to 2 p.m. The exhibition is located in the Madsen/Nelson/Elmen Galleries of the Center’s Fantle Building at 2121 South Summit Avenue, Sioux Falls, SD.

A reception with members of the Pipe On Head family and artist talk will be held July 24, 2019, from 6-8pm.

Carolyne D. Landon is an interdisciplinary artist. Her paintings, drawings and prints have been exhibited in museums and commercial galleries in the U.S., Korea, and China. Her illustrations have appeared in Smithsonian magazine, and her writing and photography has been published by The Nature Conservancy. Landon’s work as a courtroom TV news artist appeared for several years on NBC-TV News and in The Washington Post.

The Center for Western Studies